STATUS: WANTED
On Monday, November 08, 2021, at approximately 12:30 am Keylan Baker was involved in a shooting that occurred in the 800 Block of Orange Ave. in Daytona Beach, Florida. Keylan Baker was identified as the suspect in the shooting and has been on the run ever since. Keylan Baker is believed to have fled the Daytona Beach area and is possibly hiding in the Tampa Clearwater area. Keylan Baker has ties to South Florida, Okeechobee Florida as well as numerous family members in Georgia. Keylan Baker should be considered ARMED and EXTREMELY DANGEROUS. 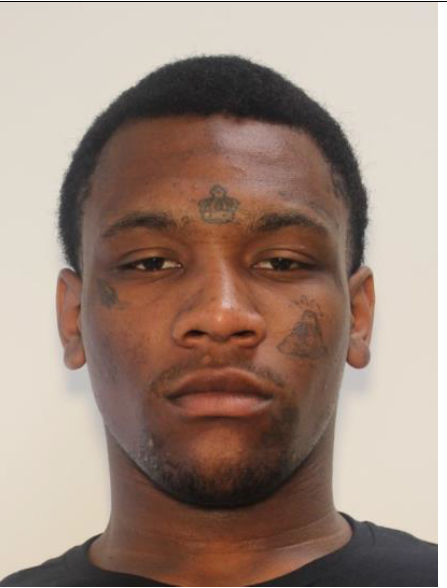 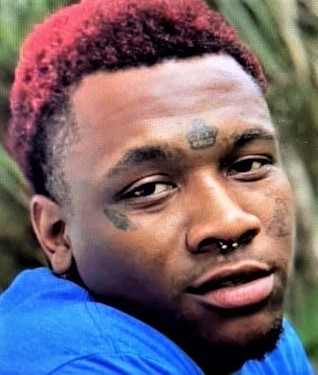 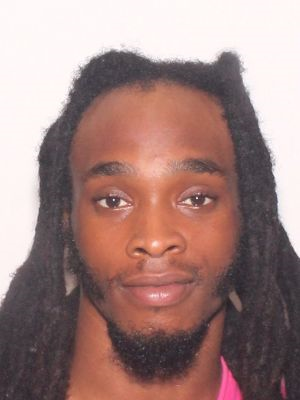 On the evening of 04/23/2021, victim, Clifton Cole Hafner was shot and killed in the 600-block of West Ida Street in Deland, FL. For information leading to an arrest in this case, you could be eligible for a reward of up to $9,500 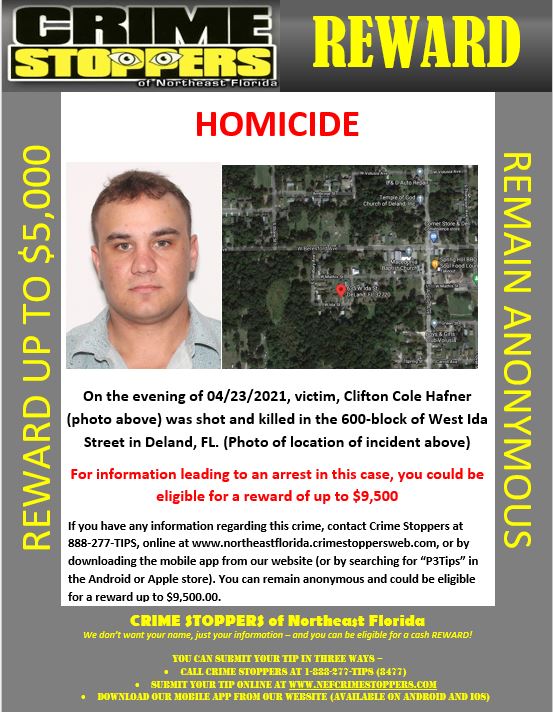 On 3/18/21 at an unknown time, near the intersection of Tomoka Farms Rd/ Town West Blvd in Port Orange, the pictured green dump trailer was stolen by unknown suspects. It is described as having a silver “Hughes” logo on the side.  If you know where this trailer is located, you may qualify for a cash reward! 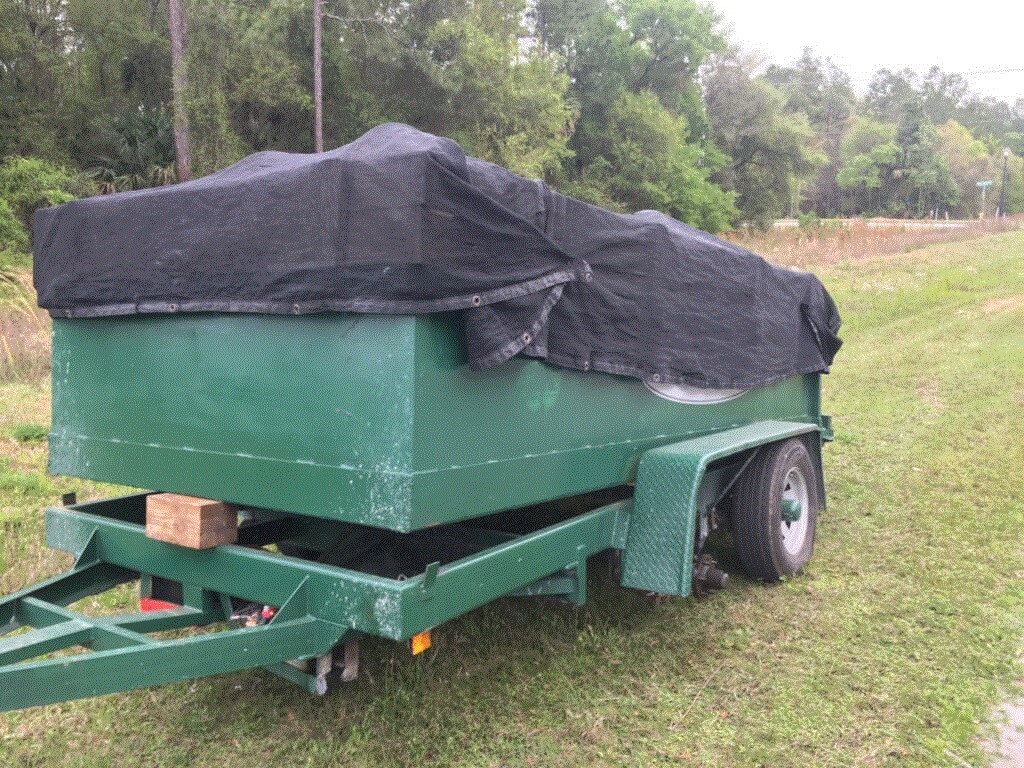 On Sunday, November 17th, 2019, at approximately 9:30pm an attempted Armed Robbery occurred on Margie Ln in Daytona Beach, FL. Mr. Sammy Watson was injured during the incident and shortly thereafter died as a result. The Daytona Beach Police Department needs help identifying any addition witnesses/suspects who may have been involved in this incident.

If you have any information regarding the incident, contact Crime Stoppers at 888-277-TIPS, online at http://www.northeastflorida.crimestoppersweb.com, or by downloading the mobile app from our website (or by searching for “P3Tips” in the Android or Apple store). You can remain anonymous and could be eligible for a reward up to $5,000.00. 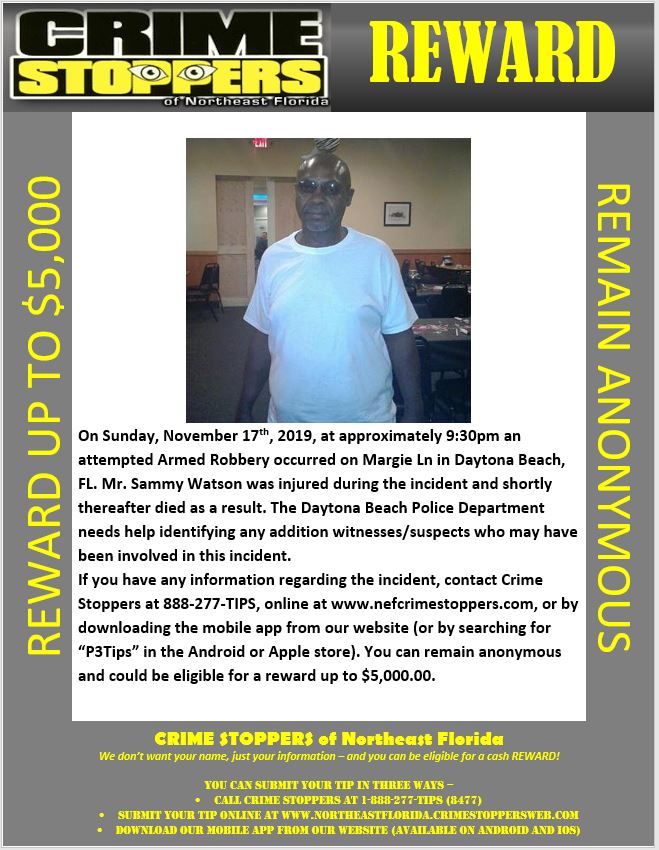 STATUS: OPEN
Sheriff's detectives are still looking for information in the December 2016 death of Mr. Carl Husfeld in DeLand. We don't want your name, just your information. You can stay anonymous and still receive a cash reward. 888-277-TIPS 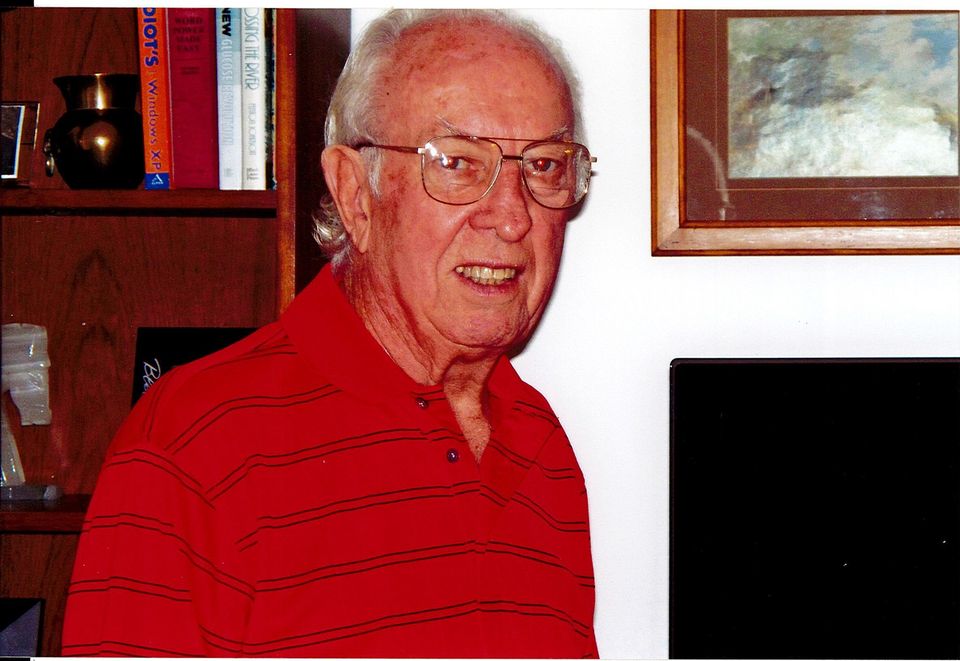 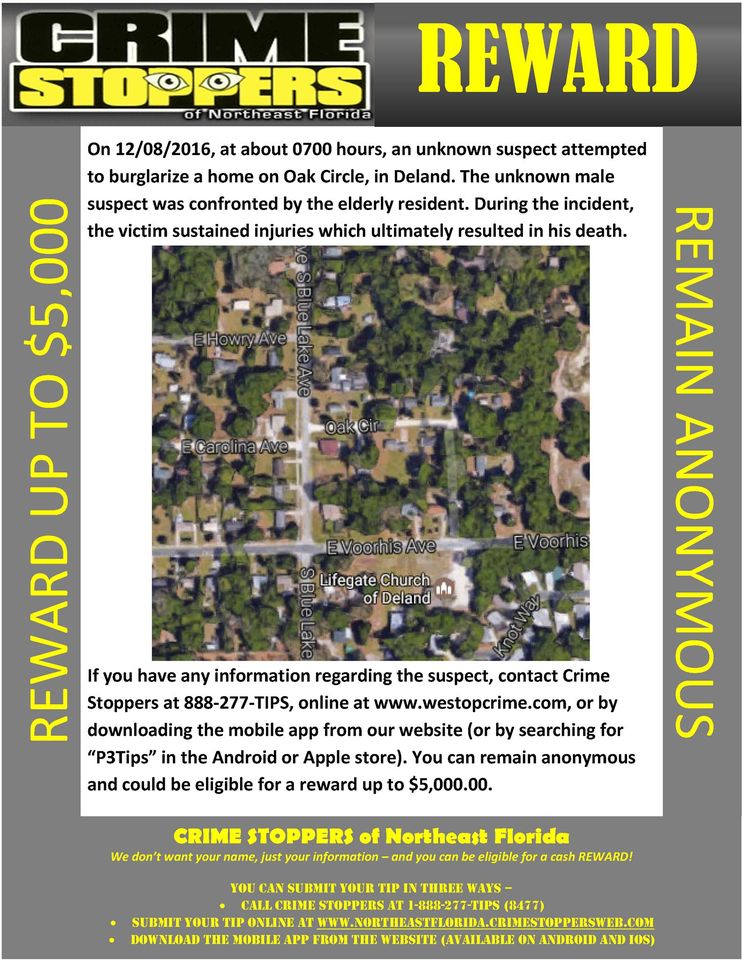 On Wednesday, April 13, 2011 at 3:21 pm, the Sheriff’s Office received a 911 call about a hit and run crash. Deputies found the victim, Bryan Bennett Wrigley, deceased in a ditch. Detectives determined Bryan was riding his bicycle eastbound on CR-214 when a westbound vehicle struck him.

Evidence at the scene indicates the vehicle is a 2001 – 2003 Blue Ford Ranger XLT Pickup. After striking Bryan, the driver of the pickup continued westbound. A witness saw a blue extended cab Ford Ranger pass by his home on CR-214 shortly after the crash with a bicycle tire stuck to the front of the pickup. He also described the driver as a younger (17-22) year old male. 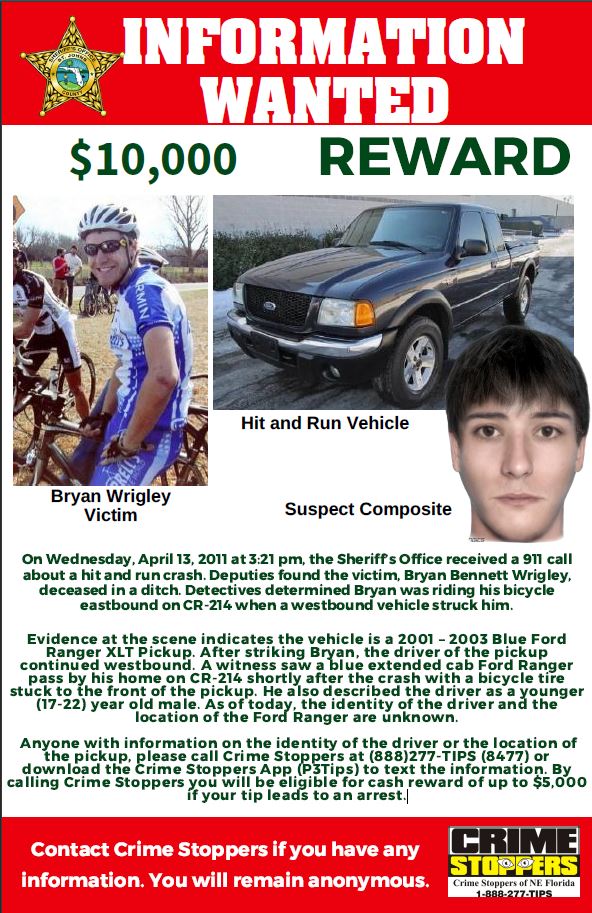 On the morning of May 26, 2020, the Flagler County Sheriff’s Office (FCSO) responded to the area of Rockefeller Drive for a shooting.   The victim, an adult female who had just arrived at a residence in the area, reported that she was shot at multiple times shortly after exiting her vehicle.  At least one round struck the victim in the leg, knocking her to the ground.

The shooter was described only as a “younger” black male (in his teens or twenties), wearing a dark colored shirt, red “Abercrombie type” shorts, and a red bandana.  After the shooting, the suspect fled on foot toward Rolling Sands Drive.  No vehicle was seen in the immediate area.

If you have any information on the identity of the suspect in this case, contact Crime Stoppers of Northeast Florida. If your information leads to an arrest, you can remain anonymous and you could be eligible for a reward of up to $5,000.

On 8/1/2020, at approximately 11:52 pm, there was a large gathering of about 400 people at “The Place”, 411 South State Street. The event was identified as the “Bunnell Hood Affair”, and was not authorized by the City of Bunnell. The event included the area of MLK Boulevard and Church Street.

Bunnell Police Department officers responded to the area of the event after shots were fired, and found a juvenile victim at the intersection of South Church and MLK Boulevard. The victim was suffering from a gunshot wound to the buttocks and hip. The victim was transported to Arnold Palmer Hospital in Orlando.

BPD and FCSO detectives responded to the scene to process and collect evidence to include DNA from blood trails and cartridge cases. The investigation revealed that there were multiple firearms discharged and/or used during this incident to include one of .223/5.56 caliber.
The Bunnell Police Department is seeking any information regarding the identity of the suspects involved in this shooting. If you have any information regarding their identity, contact Crime Stoppers of Northeast Florida. You will remain anonymous and could be eligible for a reward of up to $5,000 if your information leads to an arrest.

On Tuesday, June 2nd, 2020, at approximately 3:40am a Charles Brown was the victim of a homicide that occurred at 645 Westmoreland Road in Daytona Beach. . The Daytona Beach Police Department needs help identifying any additional witnesses/suspects who may have been involved in this incident.

If you have any information regarding the incident, contact Crime Stoppers. You can remain anonymous and could be eligible for a reward up to $5,000.00. 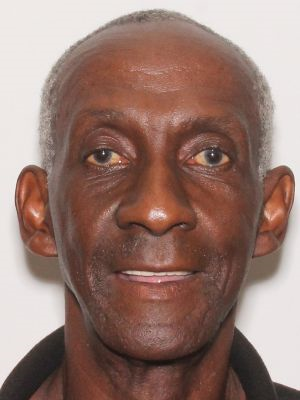